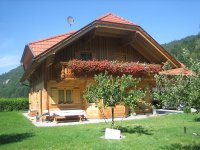 The company Bio Holzhandels-und Trocknungs GmbH is specialised in import and export from hard wood products and it was founded by Bozic Janez in 1992.

From the start the company was growing rapidly and not long after the start followed the construction of a warehouse.

1997 the new officebuilding was finished in a typical Austrian Style.

In the year 2004 a second warehouse (500 square meters) was build to store kiln dried wood.

One of the warehouses was completely destroyed by a fire in 2010. A new warehouse was build in 2011.

2012 Harald Sadovnik took over the company from his father